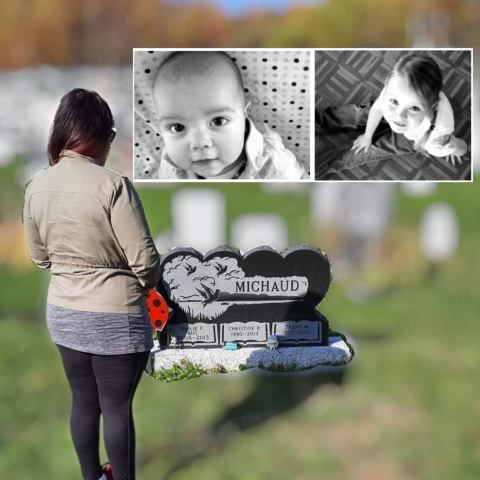 "Knowing what I know now, I would have buckled my children differently." This mom wants you to learn from her family's tragedy.

Eran Jalbert Jones is a New Brunswick mother whose life has been transformed by the worst kind of grief. March 2022 marked the 9th anniversary of the day two of her children and another family member were killed in a car collision caused by a reckless driver (later convicted). Since that fateful day, Eran has navigated a journey filled with PTSD, insomnia and mental illness, as she struggles to find meaning and purpose to move forward. Despite the unbearable pain of her loss, Eran has found hope in her quest to raise awareness for better regulation and legislation for car seats and booster seats in Canada. Although her children were secured according to the legal minimums that day, they were not adequately protected.  With the hope that others might learn from her family’s tragedy, Eran reached out to Child Safety Link and asked us to share her story. Here is our conversation with her.

We know that day changed the course of your life forever. Can you tell us what happened?

Eran: March 20, 2013 started off like many other winter days in Slave Lake, Alberta. It was an overcast day, snowing a little off and on. I had planned to make the two hour drive to Edmonton for a couple of appointments with my sister-in-law Christine and my 17-month-old son Trent, and my daycare plans for Hailie, 4, and Owen, 3, had fallen through. The kids were hoping that we would be able to visit the West Edmonton Mall after my appointments. So we loaded the kids into their car seats and set off.  Hailie was sitting in a backless booster seat behind Christine, the driver. Trent was in the middle seat in a forward-facing seat with a five-point harness and Owen was sitting behind the passenger’s seat, also in a backless booster seat.

We drove slower than normal since there was some light snow on the road. The highway was busy. We stopped for a break after about an hour, which is when I turned around from the passenger seat and snapped a photo of the kids in the back seat, all strapped into their car seats.

About 30 minutes after we set off again, it happened. We watched a white Dodge Ram truck on the opposite side swerve and almost hit a minivan in front of us and then, moments later, it crossed the line fully headed directly towards us. My sister-in-law said, “Hold on, I’m going to take the ditch.” She tried her best to get us out of the way, but it was too late. We collided head-on with a massive impact and the car spun. Later, a police officer said it must have been eight to ten times.

When I came to moments later, I was pinned and couldn’t move or look around. I was in shock, fading in and out of consciousness and couldn’t grasp what had just happened. I knew Christine hadn’t survived when I saw her hand fall from the wheel. I couldn’t see or hear my stepdaughter at all. Owen was screaming in pain and fear. When my memory came back more fully later on, I remember hearing Trent take his last breath. A man came to the window to see if I was OK, followed by another lady driver, and he told her to step back, that she “would not want to see this.”

Seven hours later in the hospital, I learned that Hailie had been killed instantly — she had slid down under the seat belt in her booster seat. Trent died immediately from injuries to his spinal cord and Christine had also died on impact. Owen was alive but was in critical condition with a grade 4 concussion, collapsed and punctured lungs, internal bleeding and fractured arms. He almost didn’t make it through the first night. We ended up being in the hospital for more than two weeks. That time still seems surreal to me: a combination of pain and anxiety medicines, coupled with the most extreme sadness and shock I have ever experienced. I couldn’t believe how drastically our lives had changed in just a few moments.

What can you tell me about your family before this tragedy?

Eran: Hailie was very strong-willed, determined and would have done great things in her life if it hadn’t been cut short before her fifth birthday. Trent was my first biological child and my miracle baby after several heartbreaking miscarriages.

We were a happy family—not perfect—but happy, looking to do the best we could to raise our kids. We had left New Brunswick for Ontario in search of a better life and ended up continuing across the country to Alberta for opportunities there. I have always loved children and was running a day home for kids. We loved taking our children on small adventures, hikes and doing crafts. We were excited about our new life in Alberta and then this happened three months after we got there. We moved back to New Brunswick almost a year after the crash because Alberta just wasn’t the same for us anymore.

How has your family’s tragedy changed the way you think about injury prevention or child passenger safety?

Eran: I had always thought a lot about the safety of my kids (and all kids) but of course safety—especially child safety in cars—is my mission now. Knowing what I know now, I would have buckled my children differently in the car. Although they were correctly restrained according to Provincial law and Canadian regulation, I now know that there were better options that would have given them more protection.

Trent’s spine was severed because he was sitting in a forward-facing seat. Although he was the correct weight for the seat, young children have large heads and weak necks. If he had been sitting in a rear-facing seat, the force of the frontal collision would have been distributed along the back of the car seat protecting his head, neck and spine.

Hailie was 4 years old and just over the 40 pound minimum to use a booster seat. She was using a backless booster and the impact forced her to slide under the seat belt and under the driver’s seat, causing fatal internal injuries. I now know that she would have stood a better chance if she had remained in a seat with a five-point harness.

Although Owen survived, he may have sustained less severe and life-impacting injuries had he remained in a five-point harnessed car seat.

We know you’ve been reaching out to government (etc.) about making changes to certain aspects of car seat legislation. What are you hoping to change for the better?

Eran: I am talking to provincial and federal governments and asking them to look at raising the minimums. Many states now have laws that children must ride rear facing until age two, so why can’t we?  Are our kids less important than kids in California or Pennsylvania?

I also want to raise the minimum age to use a booster seat to at least five or six years old. This would have helped prevent the submarining effect that happened to Hailie.

Although my own children were younger, we also know that older children are safest using a booster until they fit the adult seat belt safely.  I would like to see the law changed so that kids need to stay in the booster seat until 4’9” (145 cm) tall or 12 years old. Most nine year olds are simply not tall enough.

My goal is to help educate parents and the community that the minimum car seat standards and laws set forth by our governments are not enough. I want to try to help prevent more injuries and deaths to children. I try to go into meetings with a positive outlook and messages. When we know better, we do better.

I am so grateful to be making even a small difference by sharing my children’s story.  It is my way of honouring them. Even if one child is saved and one family is spared the tragedy that we suffered, it gives their loss meaning.

Tell us about you and your family now – we want to hear about how you are doing and your other children.  What are your hopes for the future?

Eran: Our family looks a lot different now than it did six years ago; we are living our “new normal.”  Today, Owen is 13 and we now have Oliver who is seven and Elizabeth who is four. We keep Hailie, Trent and Christine’s memory alive — we still celebrate their birthdays with cake and balloons and the children all know they have a brother and sister in Heaven.

Life is busy as I try to move forward and honour the memory of my family. I am currently going back to school and I would love to be a lawyer at the end of all this so I can help people going through what I have been through.

My biggest hope for the future? To see our three children laugh, play and grow up. I want to be a grandma! Keeping them safe so that they can thrive is going to be my priority for the rest of my life. Helping other families keep their children safe is who I am now.

What is your message to parents, families and caregivers?

Eran: My main message for parents: Be open to advice when it comes to your children’s safety.

I know my story is hard for others to hear, because I have experienced every parent’s worst nightmare. As parents, we are bombarded with information about parenting tips, choices and options—it can be overwhelming. Despite the tragic thing that happened to us, I make real efforts not to “bubble wrap” my kids. Kids need to be kids and they need to play, be active, explore and learn about the world we live in through experience. But I am more aware of what can happen and of how many serious injuries are actually preventable. I was blissfully unaware of all of that nine years ago.

All I can hope for is that my message is heard and that people actively listen and make small changes that could help save lives, one car seat at a time.

To read this blog in French, click here: https://bit.ly/3UEvCvC

For more information on child passenger safety for all ages and stages of children, visit www.childsafetylink.ca or call 1-866-288-1388 (toll free in Atlantic Canada). 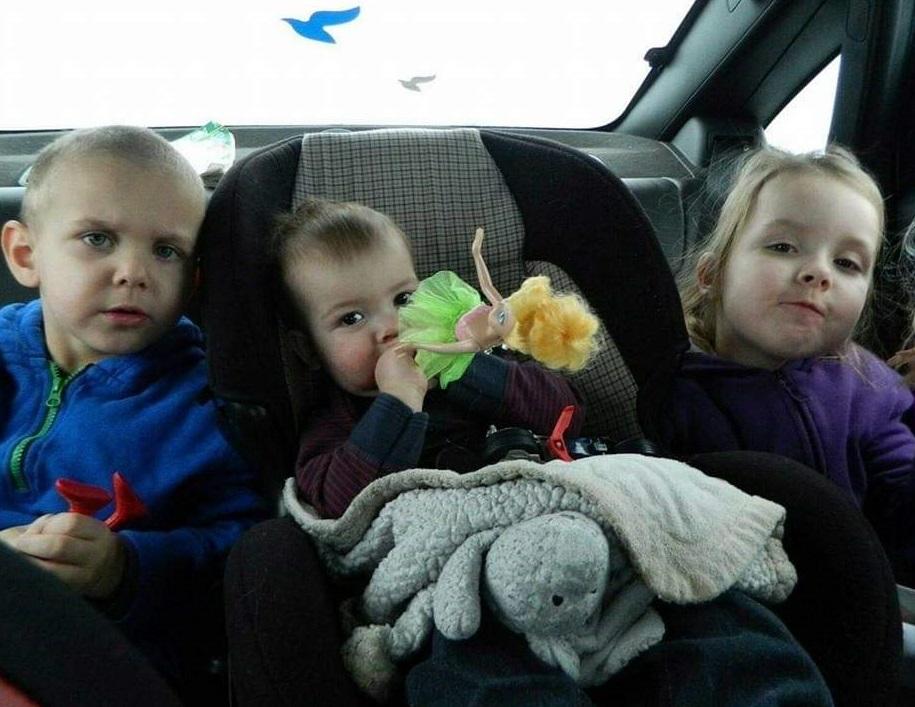